The oil trade wasn’t sexy, but it’s been delivering … a new, similarly “unsexy” trade that is likely to be equally rewarding … the macro tailwinds that will drive gains looking forward

From our macro specialist, Eric Fry, back in December:

Since then, we’ve seen oil prices soar through $100 a barrel. As I write on Thursday, West Texas Intermediate Crude trades at $114 a barrel (though it was at $120 yesterday before today’s Fed-digestion-based selloff).

Meanwhile, XOP has pushed as high as about $170 before pulling back over recent sessions.

Together, those seven recommendations have produced average gains of more than 24%… while the S&P 500 has slumped into a bear market.

Oil is not the most exciting trade…. it’s not glamorous… it’s increasingly frowned upon by ESG warriors….

***In fact, the fossil-fuel energy trade is one of the only investments that’s been working in 2022

This highlights an interesting aspect of investing, which I’ll let Eric explain:

[Oil being up while the average stock being down] is not the market summary that thrills very many investors. But this exact summary has become a recurring storyline in 2022.

This sort of stock-market action reminds us that successful investing is never about what you wish would happen; it is only about what is happening.

You can try to outsmart the market and position yourself for what you think the market should be doing…or you can look at the market as it is, accept it, and make money based on those conditions.

Today, despite big gains over the last year, the oil trade appears positioned to continue making strong returns for investors. In past Digests, we’ve offered reasons why. And we’ll continue tracking this trade in the weeks to come.

But for today’s Digest, we’re going to put a new trade on your radar courtesy of Eric.

Similar to oil, it’s a trade that most investors might not find all that sexy. But also similar to oil, it carries a high likelihood of making investors a solid, double-digit return during dangerous market conditions.

And healthy profits during a bear market is very sexy.

Today, let’s be investment pragmatists and turn our gaze to Europe.

***Looking beyond the U.S. to find far more attractive opportunities

For newer Digest readers, Eric is the analyst behind Investment Report, and probably the most successful investor you’ve never heard of.

In 2016, some of the world’s best money managers and stock pickers, including Eric, participated in an annual investing contest. Leon Cooperman, David Einhorn, Bill Ackman…

Beyond that, over his career, Eric has dug up 40 different 1,000%+ returning investments. Most investors never get one.

Most recently – yesterday, in fact – we noted that Eric just led his Speculator subscribers to a 300% return in their TLT trade, and they’re up 325% in their DBC position.

This comes after the 340% gain for Speculator subscribers from their XOP trade locked in back in May.

Returning to today’s opportunity, where is Eric looking now?

Well, if you know Eric, you know that as a macro investor, he starts by looking for attractive “big picture” trade set-ups.

U.S. stocks are in a downtrend, yet still expensive. That’s not a big-picture attractive trade environment.

But that doesn’t mean such an environment doesn’t exist. 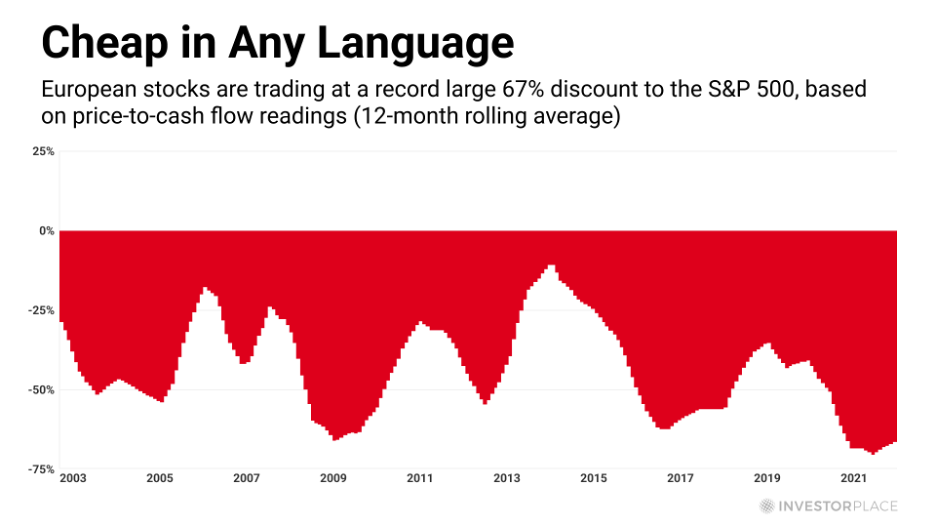 The one with the Russia/Ukraine war? A huge migration of refugees? Massive energy problems, thanks to Russia? Anemic economic growth? Several eurozone countries with enormous debt problems?

To walk through the opportunity, Eric compares three investments:

2) the Invesco QQQ Trust (QQQ), which tracks the 100 largest non-financial stocks in the Nasdaq Composite Index

Coming in last place…by a zillion miles…is FEZ, which has returned just 7%.

Now, some investors might look at this return differential and assume the SPY/QQQ domination is because U.S. stocks are the best. Cue the chants of “U-S-A! U-S-A!”

A phenomenon called “multiple expansion” would be a better explanation.

***A tale of two continents

Eric writes that back in 2014, the S&P 500 Index and the MSCI Europe Index were both changing hands for about 10 times annual cash flow.

Let’s call this our starting line.

So, what happened next?

Well, the U.S. went on a monster bull run, benefitting from multiple expansion. Meanwhile, European stocks were dragged down by persistent multiple contraction.

Back to Eric for where we find things today:

…Over the ensuing years, the American price-to-cash-flow multiple expanded to as much as 20 times, which was an all-time record, by the way.

Today, even after the steep selloff of the last several months, the S&P 500 trades for more than 15 times cash flow.

Meanwhile, back in the Old World, valuations spent the last eight years contracting from 10 times cash flow to as little as five times.

Even now, European stocks are selling for less than six times cash flow – or about one-third the level of U.S. stocks.

Now, Eric is quick to point out that this valuation differential does not automatically mean that European stocks are a “buy,” but it does suggest that they are a better value than their American counterparts.

In past Digests, we’ve highlighted market studies that look at forward 10-year returns based on different beginning valuations.

There’s no reason to believe that dynamic won’t play out similarly this time around.

Beyond valuation, European stocks have a huge advantage over U.S. stocks – monetary policy.

Here in the U.S., our Federal Reserve began conducting its initial QE programs during the 2008 financial crisis. It continued its QE operations for nearly six years before halting them in October 2014.

During those years, the Fed’s QE programs spent $2.6 trillion buying up U.S. Treasury and agency debt.

Over the same timeframe, the total capitalization of the U.S. stock market skyrocketed from $8 trillion to $24 trillion. That works out to about $6.2 trillion of additional market cap for every $1 trillion of QE dollars spent.

Fast forward to the COVID-era stimulus and we find a similarly salutary effect.

During the same period, the total capitalization of the U.S. stock market skyrocketed from $24 trillion to $54 trillion, which once again works out to more than $6 trillion of additional market cap for every $1 trillion of QE dollars spent. Not bad!

But the Fed’s QE program has now shifted into reverse. The Fed is withdrawing liquidity, while also raising short-term interest rates. Neither activity is a boon to stock prices.

In Europe, by comparison, the European Central Bank (ECB) is pursuing less “hawkish” policies. More than 60 other central banks around the globe have raised interest this year, in effort to combat inflation. But the ECB has not.

Now, Eric does point out that the ECB just announced that it will begin raising rates next month and will continue inching them higher in the fall.

Nevertheless, ECB monetary policy is likely to be much friendlier to the stock market than the policy the American Fed is pursuing.

Beyond that, Eric writes that Europe’s relatively far-more-attractive stock market valuations are pricing in a significant amount of adversity that U.S. valuations are not. Plus, European dividend yields are more than double what typical U.S. companies pay.

To be clear – buying Europe doesn’t offer pie-in-the-sky monster return possibilities. But in market conditions like those we’re experience today, any reasonably strong return is a big winner when the alternative is a bear-market loser.

Back to Eric on his expectations for buying Europe:

To be clear, I’m not expecting European equities to rocket higher from current levels.

But I am expecting them to embark on a long period of outperformance, relative to the large-cap U.S. stocks that populate Indices like the S&P 500 Index and the Nasdaq 100 Index.

***Wrapping up, buying oil several months ago wasn’t exciting, but the fundamentals were there

And knowing what we now know, who wouldn’t love to go back in time and put some money into that trade?

In the same way, buying Europe today isn’t sexy. But the fundamentals are there.

And based on myriad tailwinds, odds are good that this trade will also turn out to be a winner when seen in the rearview mirror.

Bottom line – it’s time to give Europe a look. For more of Eric’s research on this opportunity as an Investment Report subscriber, click here.

Have a good evening,